This weeks featured article in The Charlatan 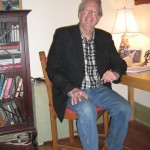 David Cayley in his house in Toronto, 2013 – Photo by Will Tait

Conversations between Cayley and Illich, 1992

* These pictures are better seen with  Firefox or Chrome browsers

This week Carleton’s student newspaper, The Charlatan, published a feature article on voluntourism.  The author, Erika Howes, asked me about the history of the phenomenon. One of the events I mentioned to Erica is the conference of Ivan Illich, the catholic priest, social critic, and missionary who, in the late 1960s, told American students eager to go and save people abroad to stay home.  International charities, he contended, were plagued with the kind of paternalism which still tainted the very kind of religious missions he was trying to reform from within.

The conference was brought to my attention last year by retired CBC radio producer David Cayley, during an interview where he recalled his days as an employee of the the small and main office of Oxfam Canada, then in Toronto, in the mid-sixties.  Well known later for the program Ideas, Cayley would come to  know Illich well, be able to conduct rare interviews with him, at the turn of the 1990s, and to write about his thoughts.  In the preface of the written transcript of their conversations, he recalls how he found the conference paper, in a bundle of material sent by the Canadian University Services Overseas  (CUSO)* to  returning volunteers like him.  Cayley had spent two years teaching in northern Borneo before working for Oxfam. CUSO’s leaders, he gathered, might have thought their own organization to be too good to be part of Illch’s indictment. But the sharp denunciation continued to trouble him.

Here is the text of the conference Illich gave in 1968, and which impressed the young Cayley, “The Hell with Good Intentions.” And here are a few audio recorded excerpt of their conversation, which address, in part, the question of good samaritans.

Cayley worked mainly at the education branch of Oxfam, touring schools and producing material to instruct young people at home about the Third World, to create the kind of “informed community” Illich was calling for.

Listen, the Educational Supplement to Oxfam Canada’s Bulletin, edited by Cayle and his colleagues on the mid- 1960s, to “Create an informed community” and “face the crisis of development”.

Still, when in Oxfam, he did organise a trip for Canadian high school students in Mexico, which, he reckons from later testimonies, transformed the lives of many.  The story has to be told more fully, but it is not unlike the adventure of British teenagers who went to Algeria in the late 1960s, this time with Oxfam UK. It was called “Operation Oasis“, and McGill Ph.D. candidate Marie-Luise Ermisch has written about this story in a blog for the  UK Voluntary Action History Society.

Today’s tensions around the “good intentions” of voluntourism, identified in The Charlatan‘s article, are also well documented in the anthropological study MA student Cassandra Verardy completed last year, for her MA thesis in anthropology at Carleton University, on “Perceptions of Voluntourism,” by interviewing a dozen of voluntourists.  Cassandra presented her thesis in three minutes last year, and here is the video. Last Winter in the course on the history of humanitarian aid I taught, Mackenzie Dancho prepared this potent visual summary of the dilemmas associated with voluntourism.  The display attracted a very large comments by fellow students, who are at once attracted to and concerned by, possibilities of volunteering and traveling abroad at the same time.

*See the free sample chapter on CUSO in India,  of Ruth Compton-Brouwer’s recent history of CUSO, based on volunteer’s interviews.